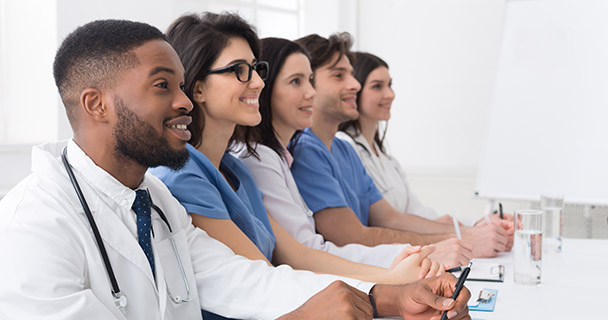 The Impact of Unconscious Bias on Healthcare

Unconscious bias is defined as ideas about certain groups of people that individuals have without being aware of them. Our brains use and recognize patterns among information, events, or people to allow for quick decision making. Research has shown that our brains make decisions up to 10 seconds before we even realize it, meaning our decisions actually take place in the unconscious. When automatic processing is influenced by stereotypes, unconscious or implicit, bias is activated.

There is increasing evidence that unconscious bias leads to false assumptions and negative outcomes for minority groups in healthcare settings. This contributes to health disparities, where certain groups experience inequalities in the provision of and access to healthcare. Health disparities are commonly considered to be an issue of race or ethnicity, but people are subject to unconscious bias based on many factors, including:

There are myriad instances where unconscious bias negatively impacts the healthcare patients receive. For example:


In 2016, the Journal of Clinical Oncology released a study of black cancer patients and their physicians. The study found that providers who were marked as “high” in implicit bias were less supportive of their patients and spent less time with them. Black patients picked up on those attitudes, viewing physicians “high” in implicit bias as less patient centered. Patients also had less confidence in their treatment plans, felt it would be difficult to follow the treatment plan, and had difficulty remembering what their physician said. The study concluded that patients who interacted with physicians with high implicit bias walked away from the interaction feeling as though the physician did not care about them, could not be trusted, and offered a treatment plan that may not work.

So how do healthcare organizations create change around bias? It requires much more than a vision statement, a diversity committee, and training program. There must be a commitment to a culture change by building institutional capacity for change and creating equitable environments.

Physician vulnerability to unconscious biases is heightened by the conditions under which they work today, including high levels of stress, frequent distractions, and brief visits that leave little time to get to know patients. The focus should be on reducing the impact of unconscious biases on physician-patient interactions and medical decision-making. That process can begin just by recognizing that unconscious bias not only exists, but exists within us, no matter how much we don’t want to believe they do.

Physicians must see their patients as individuals rather than part of a faceless group. This can be done by not only identifying each patient’s unique qualities and/or features, but also putting yourself in their shoes. The black female patient becomes Sandra, a school-age teacher who has 2 kids of her own, had to take off work to come to the doctor’s office, and needed to find childcare.

Another strategy is to consider the opposite conclusion when making decisions. When data seems to point to one conclusion, take a minute to look for data that supports the opposite conclusion before making a final decision. You can also counter stereotypes by spending time with individuals from groups you have bias toward; This can give you a deeper understanding of the differences. It also allows you to explore new perspectives and increases the opportunity for positive physician-patient interactions.

Unconscious biases are real, exist within all of us, and can have significant negative impacts on the quality of healthcare that patients receive. With meaningful effort, we can work to counteract these biases and improve the interactions between physicians and patients. Learn more about HealthStream training to combat bias and support diversity.