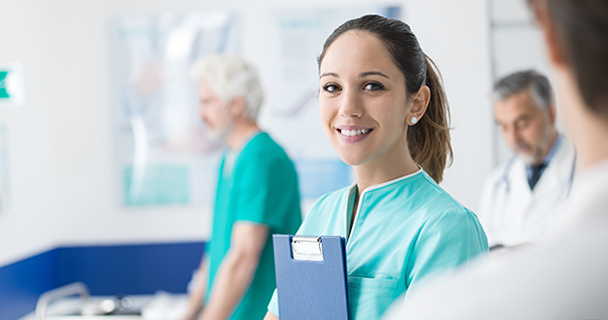 When people of multiple generations work together, it is important for them to appreciate each other’s unique approach to work. Understanding the variance in work ethic, approach to authority, and taste for collaboration can go a long way towards helping everyone be more successful in their jobs. Here are some generalizations about how the five generations in the healthcare workforce feel about work:

The work ethic of the silent generation can be described as dedicated. For this cohort, even if someone feels sick or doesn’t want to go to work, not going is never an option. They are respectful of authority and appreciate hierarchy. Typically, a boss was held in high regard. If you saw your boss coming towards you for a conversation, it wasn't a good day and you probably lost your job.

Coming from a world where the economy was thriving and opportunities were booming, baby boomers tend to be driven in terms of their work ethic. Many people in this generation had an opportunity for a career and a university education, unlike their counterparts earlier in history. Women and minorities earned degrees and were in positions of authority like never before. They have respect for work as a result, as well as for official qualifications or credentials. Their view of authority is one of extremes—both love and hate. In healthcare, a manager with an open shift knows that if called, a boomer is very likely to show up. For that reason, many managers had a tendency to lean on them more heavily than other generations.

For that same empty shift mentioned above, a Generation X employee is less likely to come in. Though Gen Xers still have a positive work ethic, they are more attentive to wanting balance in their lives. Many among this group were the first generation whose parents both worked outside of the home. Their fathers were working 60 or 80 hours a week, to the detriment of their family relationships. Some of this led to divorce. Gen Xers have looked at their own situation and said I'm not going to be that person. That's why they want more balance. What impresses these workers more than credentials is hard work and competence, as demonstrated by leaders.

Millennials are very determined when it comes to work. If a millennial employee knows what he or she wants to do, there's no stopping them. They've been encouraged to talk and to be heard. The need to have input, basically on everything in terms of their jobs, is not being impolite. They're just speaking up and having a conversation about what they think is important. It may just be their leaders who are not used to having a dialogue about decisions. Collaboration is second nature for millennials. They like helping each other with no thought of what they’re going to get in return. Working collectively is part of their DNA; they can multitask, more than anybody else, and they are very tech savvy. These workers typically are tenacious and very optimistic about what they can achieve.

The Optimistic Next Generation

Generation Next resembles their millennial predecessors, yet with a shorter attention span and more limited interpersonal skills, balanced by super technology skills and creativity. They're very open minded and very appreciative of feedback. They're looking for rewards, and recognition, and yet money is not as important to them. This group wants to have a flexible lifestyle that lets them do what they want. Face to face communication is valued, as is working in teams, and they're looking for a job where their creativity is valued.

Ultimately, if you're working in any industry with people of a different generation, you need to have a grasp of how their approach to work might differ from your own. That'll make working together far more effective, which is vital in an industry like healthcare, where the goal is better patient experiences and outcomes.

This blog post is the second in a series based on the HealthStream webinar, Navigating a Multigenerational Healthcare Workforce, led by Leana D. McGuire, Director of Learning & Development at United Surgical Partners. She has been an RN for over 25 years, graduating with her nursing degree in Canada. Leana spent most of her nursing career working in the CCU and as a heart transplant coordinator, but after obtaining a degree in organizational development, she transitioned from the bedside to focus on her passion for leadership and staff development.