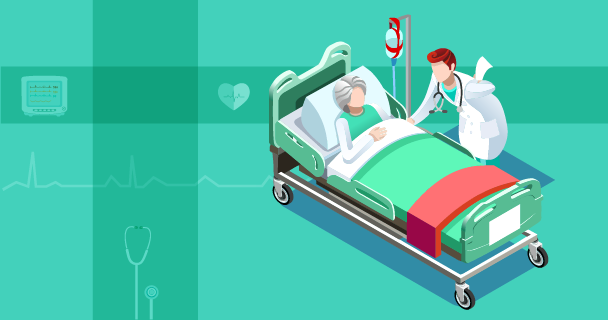 The readmission definition, according to CMS, applies to someone who has been readmitted to the same or another acute care facility within 30 days of an initial hospital stay. Today in the U.S. today, one in five elderly patients is readmitted to the hospital within 30 days of discharge, costing Medicare some $15 billion per year (Kowalski, 2015). However, readmission rates vary greatly by hospital and by state, providing us with an indication that we might have the opportunity to reduce rates by improving hospital processes. Hospital readmission costs are significant. As required under the Affordable Care Act, CMS began imposing a penalty on hospitals with excessive Medicare readmissions in FY2013 (October 1, 2012) as part of the Hospital Readmissions Reduction Program (HRRP).  There are a number of known factors such as socio-demographic status and healthcare history that place someone at high-risk for a hospital readmission. As might be expected, frail, elderly, and lower income patients who lack support at home are at highest risk. The American Hospital Association recently conducted an analysis looking at how HRRP penalties varied by hospitals’ Disproportionate Patient Percentage (DPP). They concluded that hospitals with a high percentage of needy patients were not only much more likely to be penalized but also more likely to pay a higher penalty.

The Impact of Reducing Readmissions on Staff

The campaign to reduce hospital readmissions has changed how many healthcare organizations are looking at staffing, especially when it comes to the ratio of nurses to patients. According to an article in Healthcare Business & Technology, a study by the University of Pennsylvania found that “hospitals that staff for manageable nurse workloads have lower readmission rates. The study matched 2,826 hospitals based on the number of hospital beds. The study compared HRRP penalties between the 1,413 well-staffed hospitals and the 1,413 similar hospitals with lower staffing levels. The study concluded that closely matched hospitals based on the same patient population characteristics, still differ in HRRP penalties due to the level of registered nurse staffing. The 1,413 hospitals with low nurse staffing were significantly more likely to receive an HRRP penalty compared to the 1,413 well-staffed hospitals” (Healthcare Business & Technology, 2018).

The Impact of Reducing Readmissions on Revenue

The Impact of Reducing Hospital Readmissions on Care Quality

Additional measures that may prove beneficial in reducing hospital readmissions are: